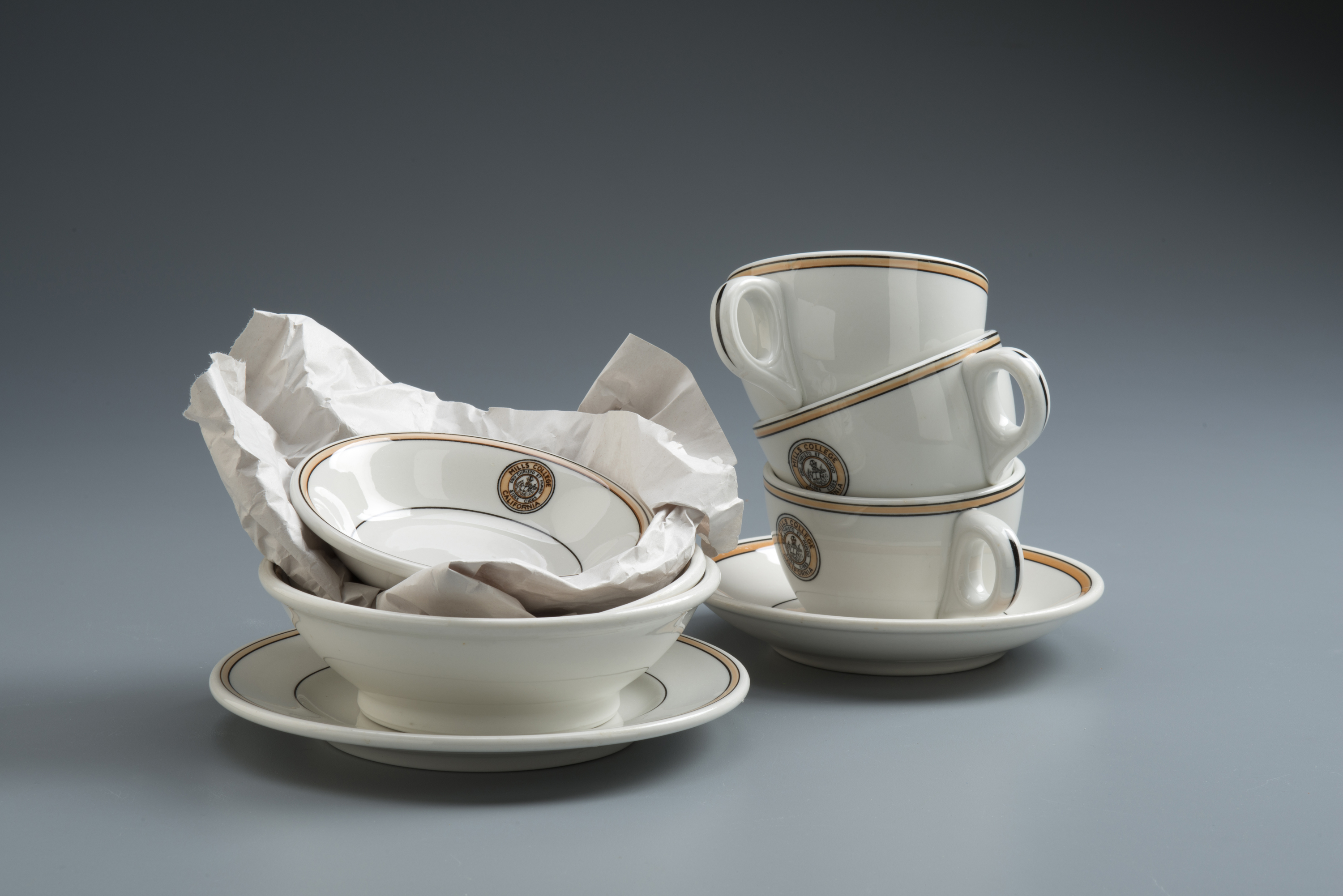 A brief history of china

A forgotten set of Mills dishes prompts a journey of discovery about tableware and dining traditions.

I was recently contacted by an alumna who had graduated in the 1950s and was in the process of selling her home of many years to move to a smaller residence. She had unearthed a collection of Mills College dishware in her garage, and I agreed to undertake a discreet repatriation of the items.

After several decades of disuse among spiders and other small garage inhabitants, the dishes needed a good washing before returning to their original home. While at the sink, I noticed that the collection wasn’t strictly a matching set. There were variations in the manufacturing marks, base color, striping, and decoration.

Curiosity used to kill the cat, now it just kills hours online. In my quest to learn more, I first turned to eBay, where I hoped to find similar items with descriptive information. I learned instead that there does not appear to be a flourishing online resale market for liberated Mills College china, although a virtual treasure trove of old Crest yearbooks is available, along with vintage song sheets, postcards, and photographs. (Oddly, a search for “Mills College” also returns a plethora of October 1987 Playboy magazines; the “back to campus” issue featured, separately, actress Donna Mills and college football.)

The clues provided by the manufacturers’ marks led me into a crash course on the long history of mergers, bankruptcies, and take-overs in the china industry. The three different marks on the dishes in this “set” could plausibly have come from the same lineage as the company changed ownership over time. Dishes with the OP Co stamp were produced from 1885 to 1890, the Wallace China stamp was in use from 1931 to 1964, and the Mayer China imprint, the most common in the batch, was used from the 1940s to the 1960s. Mayer produced restaurant ware for railroad dining cars, country clubs, and some of the finest restaurants and hotels in the United States—as well as for Mills.

A design appearing on several pieces incorporates a motto that I had never seen associated with Mills College—“Pro Christo et Mundo”—and led to more questions and research. Thanks to Google books, I found reference to the unfamiliar motto in a profile of Dr. Luella Clay Carson, then president of Mills College, published in the November 1913 issue of Sunset, The Pacific Monthly.

“Along with the intellectual training must go the developing and deepening of the spiritual nature which is the highest function of a woman’s college. And thus ‘Greater Mills College’ will interpret to a new generation its motto ‘Pro Christo el Mundo’,” President Carson told her interviewer. (Dr. Carson’s interview also included her characterization of the ideal woman: “Learned but modest, brilliant but unassuming, efficient but unselfish, with respect for men and reverence for God.” Unfortunately, the article did not include any description of the ideal man.)

I’m no Latin scholar, pero mi español es good enough to figure out that Pro Christo el Mundo doesn’t translate to “one destination, many roads.” The motto, likely an artefact of Mills’ early days as a young women’s seminary, persisted on official College publications at least until 1920; by 1938, the cover of the Crest bore the phrase to which we are more accustomed: “Una destinatio, viae diversae.”

But perhaps even more interesting than the history of the dishware itself is to imagine the generations of students who dined from them. Once upon a time, meal times at Mills were much more decorous than they are today. First-year students were welcomed with the Dean’s Dinner, a formal candlelight affair held in the residence hall dining rooms and presided over by the imposing figures of the deans of students and of the faculty. The event undoubtedly provided a good opportunity for classmates to assess one another’s fashion sense and table manners.

And the importance of manners was of great concern. A May 1957 article in the campus newspaper included one student’s suggestion that “because below-standard knowledge of manners and etiquette seemed evident among Mills girls, [students should] have meetings once a month in the halls to discuss such items as grooming, how to lead a conversation, and how to set a formal dinner table.” After debate, the idea was turned over to the Social Committee.

Dinner also set the stage for countless “candle passing” ceremonies, a ritual for newly engaged students to announce their change of status. The bride-to-be and, usually, her best friend, secretly prepared a small bouquet and taper candle adorned with the prized engagement ring. At dinner, the kitchen staff would bring the bouquet into the dining room, where it would pass hand to hand and table to table. When it finally reached the newly betrothed, she would blow out the candle and claim the ring. I’ve been told the ceremony was also used to celebrate grad school acceptance letters and even took place in Founders, where plain white restaurant ware has now replaced the Mills china.

When I was a Mills student in the late 1980s, I had heard jokes about four years’ tuition including place settings for eight. I thought they were just references to all the dishes that left the dining room and eventually turned up in the rec room kitchen sink. Now I wonder: how many other Mills women packed up institutional china along with their books and bloomers?